Professor M. Wynn Thomas, Chair of Swansea University's Use of Welsh Committee, has received an Honorary Fellowship from the Coleg Cymraeg Cenedlaethol.

Professor Thomas was one of three leading academics nominated to receive this honour in recognition of their distinguished contribution to Welsh-medium university education over many years.  Professor Wynn Thomas, along with Dr Meredydd Evans and Professor Hazel Walford Davies were honoured at a special ceremony held during the meeting of the Coleg Cymraeg Cenedlaethol's Court on 28 February. 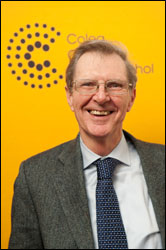 Professor Thomas, a member of staff at Swansea University’s College of Arts and Humanities, is a leading academic in the field of English Literature and Welsh writing in English. He was awarded the Emyr Humphreys Chair of Welsh Writing in English and is also Chair of the Welsh Books Council and the former Director of CREW (The Centre for Research into the English Literature and Language of Wales) at Swansea University. He was elected a Fellow of the British Academy in 1996, and received the highest honour of the National Eisteddfod of Wales in 2000.

Professor Thomas is currently the Vice-President of the Learned Society of Wales with particular responsibility for Arts, Humanities and Social Sciences. Also this year, a significant new award named in honour of Professor Thomas was launched by Parthian, The Library of Wales, Swansea University and the Learned Society of Wales, to recognise the best critical work in the field of Welsh writing in English.

However, arguably his most important contribution in a Welsh-medium context, was his chairmanship of a working party set up by the University of Wales in 2001 to consider future plans, and one of the working party’s main recommendations was that a PhD scholarship scheme should be established to nurture a new generation of Welsh-medium lecturers. Many of the young academics who were the product of that scheme (that continues within the Coleg Cymraeg Cenedlaethol) have now been appointed to lecturing posts through the Coleg’s Academic Staffing Scheme.

Professor M. Wynn Thomas said: “The founding and development of the Coleg is an essential step in the development of a complete system that will ensure the future of Welsh as a language of understanding and learning. It is a huge honour to be chosen as a symbol of the growth that has been, the excitement that exists, and the confidence that will be attached to the crucial effort to persuade young people to continue to receive some element of their education through the medium of Welsh at a university and college level.”

Professor Richard B Davies, Vice-Chancellor of Swansea University said: “Professor Wynn Thomas has a well-deserved global recognition for his own scholarly work. He has also made remarkable and authoritative contributions to many aspects of Welsh literary life. I have been proud to have Professor Thomas as a colleague and the University celebrates his Honorary Fellowship with him.”

The ceremony was held during the meeting of the Coleg Cymraeg Cenedlaethol's Court and in addition to celebrating and noting the contribution of these academics, it was an opportunity to learn more about the Coleg’s achievements during the year, and to consider some of its key plans for the future.

This was the Coleg’s first ceremony to honour Honorary Fellows and was led by the Chair of the Board of Directors of the Coleg Cymraeg Cenedlaethol, Professor Merfyn Jones. He said: “The contribution made by Dr Meredydd Evans, Professor Hazel Walford Davies and Professor Wynn Thomas to Welsh medium higher education over the years has been invaluable.  There can be no doubt that the vision of individuals such as these has been crucial in the efforts to establish the Coleg Cymraeg Cenedlaethol, and as the Coleg develops and grows in this, its first year, it is opportune that the three should receive Honorary Fellowships by the Coleg.

“There are very many exciting developments underway at the moment and I know how proud these three individuals, Dr Meredydd Evans, Professor Hazel Walford Davies and Professor Wynn Thomas, are of this work. They continue to make a considerable contribution to the work of the Coleg and this ceremony was an opportunity for us to thank them, and to show how vitally important their contributions have been in the development of the Coleg Cymraeg Cenedlaethol.”