Inspirational student Mark wins HE Learner of the Year Award

Swansea University student Mark Hall has been named as the winner of the Higher Education Learner of the Year Award at Neath Port Talbot Adult Learner Awards 2012.

The Neath Port Talbot Learning Promotion Group, in conjunction with NIACE (National Institute of Adult Continuing Education) Dysgu Cymru, held their annual Learner and Tutor Awards Event on Friday 18 May 2012 at the Towers Hotel, Jersey Marine.  The event was an opportunity for learners and tutors to gain recognition for their efforts and demonstrate their commitment to learning.

Mark Hall, from Llandybie, who is studying part-time for his BA History degree course through the University’s Department of Adult Continuing Education, at Neath and Llanelli was the successful recipient of the Higher Education Learner of the Year Award.

Other DACE students, Alan King from Seven Sisters, Neath and Dawn Kilinc from Port Talbot were runners up in this award and Dawn also won a Highly Commended Learner Award. 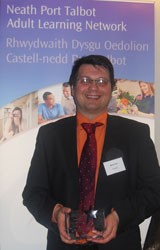 Mark first became a student when he started a Welsh language course following his return to Wales in 2005 to care for his mother. The inspiration and support that he received from tutors encouraged him to seize the opportunity to improve his qualifications. Mark  soon enrolled on the part-time Humanities degree delivered by DACE. Alongside undertaking his degree studies, Mark is a carer for his wife and has to co-ordinate care to enable him to attend class.

Mark was nominated for the Award by DACE History tutor Gwenda Phillips who suggested that “Since I have known Mark he has been very committed to the course. He travels from Llandybie to Neath and has in the past  travelled to other community venues to attend classes. Mark has a wife that needs constant care and I know that he is often worried about his wife during class but he never shows it. It must be hard for him to put his mind fully on his work but he always does so with a positive attitude.”

Mark who is entering his final year in September said, “I am determined to gain my honours degree and I would love the opportunity to inspire others as much as my tutors have inspired me. After I have completed my degree I am considering further study or possibly working in the education field.”

Congratulating Mark on his achievement, Head of the Department of Adult Continuing Education at Swansea University Professor Colin Trotman said: “I am delighted that Mark has received recognition for his studies.  He is an inspirational student and has successfully balanced his carer responsibility and study load, He is to be congratulated on gaining this esteemed award and I wish him well with his final year studies. We are all very proud of his achievements.”