When Sophie Williams graduated from Swansea University last month with a double first class BA French and Spanish degree award – achieving a double distinction for the oral examinations in both languages – she didn’t expect to top that achievement. 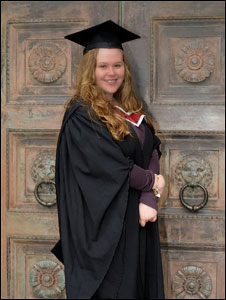 But talented Sophie (pictured), aged 22, from Wychwood Close in Langland, has now learned she is the winner of no less than four academic prizes awarded this year for merit by the University’s College of Arts and Humanities.

And while the former Bishopston Comprehensive and Swansea College pupil is extremely proud of her academic efforts, she said winning the four awards came as quite a surprise.

Sophie said: “When I received the letter from the University to tell me I had won the prizes, it was a shock.  I was overwhelmed to have won these College awards in addition to achieving my degree, but I was very pleased – it’s nice to be recognised like this.”

Sophie’s proud mum Jan Williams, who graduated from Swansea University in 1976 with a first class degree award in History, said: “I am one very proud mum and Sophie thoroughly deserves her award – her dad and I are over the moon, and were bursting with pride to see her graduate in July.”

Professor Andrew Rothwell, Head of the Department of Languages, Translation and Communication in the College of Arts and Humanities, said: “This is an outstanding achievement. It’s the first time these four prizes, endowed many years ago by highly distinguished former languages professors at Swansea, have been scooped by the same student – it is very unusual to see such strength equally across two foreign languages.

“Very well done indeed to Sophie, who has our warmest congratulations!”

Sophie, who has recently completed a six-week research internship at the National Assembly for Wales with Mark Drakeford, Labour AM for Cardiff West, is currently enjoying a well-deserved holiday.

She will return to Swansea University in October, to study for a postgraduate qualification – a Master’s (MA) degree in Politics, also at the College of Arts and Humanities.