Dewi Hopes for Successful Start to New Year in Edinburgh

Swansea University student Dewi Griffiths has been selected to represent Great Britain in the Bupa Great Edinburgh XCountry which will take place on Saturday 5 January 2013. 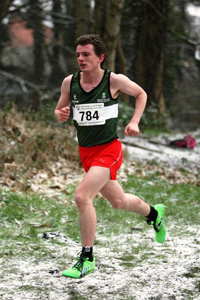 The former Ysgol Tregib pupil and experienced distance athlete was selected following an impressive performance at the European Cross Country Championships in Szentendre, near Budapest earlier this month.

The event in Holyrood Park, Edinburgh features the international team challenge which includes teams from Great Britain and Northern Ireland, the USA and Europe. They will compete in four separate races with the aim of taking the overall team challenge title, determined by the best aggregate finishing positions.

‘‘2012 has certainly been an exceptional year for Dewi which resulted in him being nominated for European Athlete of the Month for October. We’re sure 2013 will be just as successful and we look forward to seeing him kick start the new year in style with an impressive performance in Edinburgh.’’