New research into the cause of an abundance of harmful algal blooms in the North Atlantic Ocean and North Sea has been published online (Sunday, February 12, 2012) in leading journal Nature Climate Change, by a team which includes scientists from Swansea University. 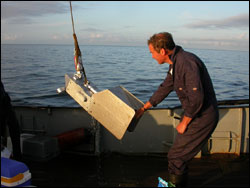 One of the paper’s authors Professor Graeme Hays, from Swansea’s Department of Biosciences,College of Science, said: “Imagine looking at your garden one morning and finding that the grass had suddenly been replaced by bushes.

“This may sound far-fetched, but we have found changes of this magnitude in the biology of the North Atlantic, with a dramatic switch in the prevalence of dinoflagellates to diatoms – two groups which include many of the microscopic planktonic plants forming the base of the ocean’s food chain.”

The findings of Professor Hays and fellow Bioscience colleagues PhD student Stephanie Hinder and Emily Roberts; Professor Mike Gravenor from Swansea University’s Institute of Life Science, College of Medicine; and Drs Tony Walne and Martin Edwards from the Sir Alister Hardy Foundation for Ocean Science, Plymouth, have shown that this shift from dinoflagellates to diatoms is partly driven by increases in water temperature, which are a well known part of global warming. 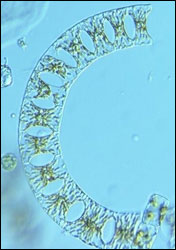 But more unexpected was the team’s discovery that the plankton shift is also strongly driven by an increase in the windiness in the North Atlantic region over the last 50 years.

“This increase in windiness is something that is often overlooked,” said Professor Hays. “In the ocean, windiness promotes vertical mixing of the water, which in turn has profound impacts on surface nutrients levels and the vertical distribution of plankton.

“In general, windier conditions seem to favour diatoms over dinoflagellates. The new patterns show major shifts in the distribution of economically important species known to cause harmful effects through toxin poisoning. 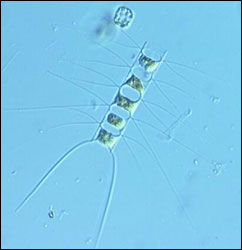 “The wider implications of this discovery are not fully known, but the switch from dinoflagellates to diatoms is likely to have propagated up the food chain to impact much larger animals such as fish and whales.

“There is also a possible threat to human health where, for example, biotoxins are ingested by filter feeding organisms, accumulate within their flesh, and then are transferred higher up the food chain to human consumption level, for example through the consumption of shellfish.”

The research team’s work was supported by the Climate Change Consortium for Wales(C3W, http://www.climatechangewales.ac.uk/), and through a Natural Environment Research Council (NERC, http://www.nerc.ac.uk/) doctoral training grant.