A Swansea University professor who is playing a leading role on the BLOODHOUND Supersonic Car (SSC) project has been elected a Fellow of the Royal Academy of Engineering. 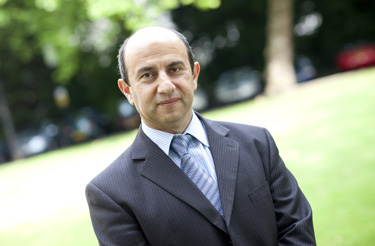 Professor Oubay Hassan, MBE, Head of Civil and Computational Engineering Centre, has been honoured for his expertise in computational methods for the solution of problems in engineering analysis and design.

He is a pioneering figure in the development and application of the unstructured mesh-based techniques that are currently in widespread use in the aerospace industry for the study of aerodynamic flows and electromagnetics.

Professor Hassan successfully utilised the ground breaking Computational Fluid Dynamics technology for the aerodynamic design of the supersonic car THRUST SSC. He is currently involved as principal investigator on the Bloodhound project where he has further refined the computational technology to address BLOODHOUND SSC’s ambitious and specific engineering challenges.

Professor Hassan said: “I am very delighted to be elected to such prestigious society. It is a great feeling to realise that the work I carried out over the last two decades is believed to have made a difference in Engineering.”

Professor Hassan is one of 59 new Fellows elected by the Royal Academy of Engineering including 52 of the UK's most accomplished engineers from industry, business and academia; four new International Fellows and three Honorary Fellows.

Sir John Parker GBE FREng, President of the Royal Academy of Engineering, said: "We welcome our new Fellows: the collective expertise and vision of the best engineers is what drives our ambitious agenda and makes so many good things possible."